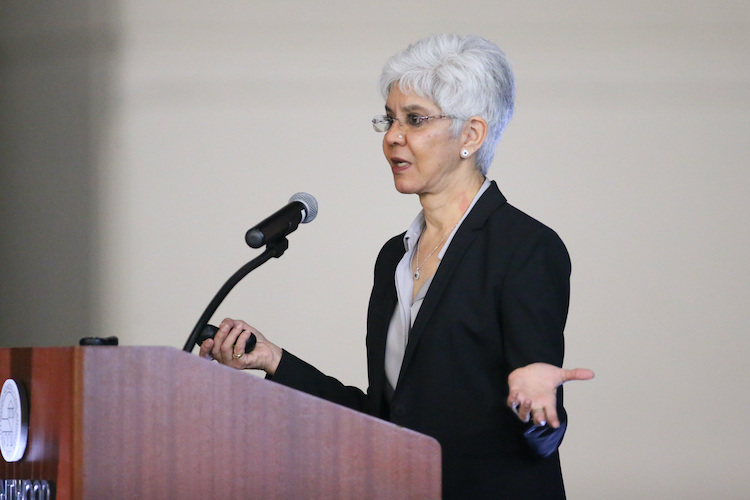 Dr. Suniya S. Luthar, one of the foremost experts on child well-being and resilience, recently joined AC full-time as Chief Research Officer. We sat down with Dr. Luthar to ask her about what first interested her in working with children, her most important findings, and what she enjoys most about her work.

The work of Authentic Connections is rooted in Dr. Luthar’s research and findings. Her three decades of experience allows AC to carefully measure student well-being and provide evidence-based recommendations to improve school climate. Dr. Luthar’s research comprises more than 145 research articles that have cumulatively been cited over 32,000 times.

Harrison Tool: Dr. Luthar, thank you so much for taking the time to talk with me today.

Dr. Luthar: Delighted to be here!

I’d like to start at the beginning. What first interested you in child psychology? Why were you drawn to this field?

Dr. Luthar: Truthfully, I can’t remember a time that I wasn’t drawn to this. Ever since I was young, even at the ages of 3 - 4, I tended to see and feel the pain of others deeply. Whether it was a child being abused by an adult or a destitute mother and her baby on the streets, I wanted to be able to help them, somehow. But I know there was a particular date and point in time when I consciously made the decision, ‘I shall be a child psychologist.’ I was 15, sitting in my grandmother's kitchen in New Delhi, India. I had just finished reading a book called, “I'm OK-You’re OK”. A popular book. And after I finished reading it I said, ‘That’s it. I want to do anything I possibly can to help children.’ In particular children in distress.

I think it's only much later in life, after I became a mother myself that I realized I had to focus on childrens’ primary caregivers, as well as children themselves. A child’s caregivers, the important adults in their families, are the people who are going to have the most influence on that child’s well-being. That’s why today our work with Authentic Connections focuses not only on understanding and supporting students’ well-being needs, but also the needs of adults who take care of them.

So you went from your grandmother’s kitchen in New Delhi to Yale and then Columbia Teachers College. Tell me a bit about that journey.

I guess the start was when I was teaching as a lecturer at Delhi University. I was teaching a course on child development and I was talking about peer relationships and I said, ‘Well, you know, during adolescence, peers become very important and families diminish somewhat in importance, but that’s based on research in America.’

And one of the students asked, ‘So what happens here in India?’ and I said, ‘Well, you know what? We really don't know.’ And that was another moment where I said, ‘Okay, I've got to figure this out. I've got to figure out how to do research, to answer questions of what really goes on in teenagers’ lives.’

I decided that I needed to pursue further studies so I started applying for graduate programs in the US.

My dissertation was on inner-city kids. While I was working at the Yale Psychiatry Department, I did this first study comparing inner-city kids with suburban kids. That was a turning point, when we discovered that the suburban kids were actually doing more poorly than the kids in poverty, especially on substance use but also in other areas. It was really an accidental discovery. We originally were looking at the suburban group as a control group for the kids in poverty.

So you were surprised when the more affluent kids showed indicators of poor well-being above those of the less affluent kids?

Yes, I was surprised, as was pretty much everyone. I don't think anyone really took the findings that seriously. I remember people saying, ‘This is probably about one community, one wealthy suburb in the Northeast. I’m not sure it is generalizable.’ And so on. I wasn’t quite sure myself whether this really would be a finding that could be replicated in different communities or on other adjustment dimensions. But it turned out to be true.

Actually, I should say that initially, there was a great deal of resistance to the idea that these kids, with all they have going for them, could possibly be doing more poorly than the average American kid, not to mention kids in poverty.

And now, after decades of your research the reasons that these kids are at-risk seem obvious. But I’m assuming that wasn’t true at the time.

No, in fact, over time we’ve really refined what we know about the drivers of poor student mental health at high-achieving schools.

We all, as scientists, have our own hypotheses as to which drivers are likely to be influential, based on what we know from research and personal experiences. In our own research, a couple of things that we had hypothesized to be major issues turned out to be true and some of them turned out to be entirely unsupported by the data.

For example, one of the things that was widely believed initially was that these kids are overscheduled; that is, they're just doing too much and that's why they're distressed. We assessed hours spent on extracurricular activities and looked at the data in relation to kids’ adjustment difficulties. It turned out that this was a straw man. Time spent on extracurriculars wasn’t that important. But we ended up finding that the degree to which kids felt they did not enjoy what they were doing was far more important. In other words, it was a lack of enjoyment of extracurriculars, as opposed to just hours spent on them. The key takeaway is moderation. Kids have to be allowed to participate in activities which bring them some pleasure.

One of your findings that I find most interesting is that some of the poor outcomes affluent kids experience are driven by the pressure for them to be as successful as their parents have been. It’s really encapsulated in the saying, “I can, therefore I must.” Because these kids have so many activities available to them and have the resources to get into top colleges, that’s the bar that is set for them. I think it’s natural for parents to push their kids to be successful because they want what’s best for their children, but often that can lead to poor mental health. How should parents balance that desire to push their children to be the best they can be versus supporting their child’s overall well-being?

First of all I want to reiterate what you just said. It is absolutely natural and understandable for all parents to want the very best lives and opportunities for their children. What I tell parents to watch out for is their child getting too exhausted or depleted. At that point, it is probably wise to take a step back and have a conversation with the child, your family, and yourself and say, ‘All right, this may be an outstanding opportunity but it’s too much. Maybe my child shouldn’t be an athlete who is playing three sports and taking five AP courses. This is destroying my child. Something has to give.’

So what does this mean? Well, that child may not get into Stanford or Harvard or Yale or wherever, but the child will be alive! When you continue to push and push, you're taking a chance on the child's health and well-being, a huge chance. And the reality is that kids who are as motivated as these kids are will, in fact, get a decent education. We as a society have to grapple with the fact that life is not over if you don't make those top 10 or 20 schools. That’s a common misconception. I often sense the panic among kids and families that unless the student attends one of those very selective schools, then life is over. And I often say, ‘Look, I went to Delhi University. It's not even on the map of what you folks are thinking about, right? So, if you truly are committed to the ideas of what you want to do, and you have a good work ethic you can be successful.’

So I tell parents as well as kids, ‘Always be asking yourself, ‘Is this worth it? When does too much become too much? When does a lot of effort become too much effort?’ When you ask these questions, you can begin to stop the compulsive mentality of, ‘I can, therefore I must.’

That’s incredible advice. And it’s clear that your time in academia has contributed so much to our understanding of student mental health and well-being. You’ve stepped away from academia now after over 3 decades. What does that mean for your focus and time moving forward?

It's really not that big a change. For most of my career, I have spent the majority of my professional time doing research and working with communities, and that is essentially what I will continue to do. If anything I will have more time to focus on my work with communities since I will have time freed up from classes and meetings. It's very positive as far as I'm concerned! Not just positive, but extremely exciting, to have this open path here to jump full-force into my work with schools.

What do you most enjoy about the work that you've been doing working with communities?

So many things. Not in any particular order. One is that I love doing the research. I just love looking at the data. I love the feeling of having a hunch, looking at the numbers and doing rigorous analyses, and finding if the data truly support that hunch -- or if they point in exciting new directions. I enjoy trying to make sense of all of the data, putting together the story it tells. And then I enjoy getting to work with peers who review the findings and having a colleague tell us, ‘you know, this is where you need to rethink your strategy and science.’

I love talking to parents. As a mom myself, I love to engage with them. I love to share what I've learned from research and as a clinician.

Most importantly, I love the the knowledge that somewhere, somehow, we're helping large numbers of children and families, based on very sound research. It’s the knowledge that we are able to help prioritize actions in schools and families, so that we can give children the best possible shot at not just academic and career success, but at having great health and well-being.

Suniya, thank you so much for taking the time to talk with us today. I have many more questions, so we’ll have to do this again soon!